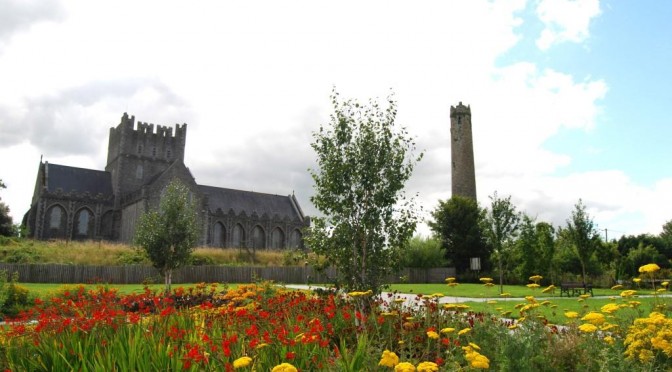 Saint Brigid is the Patroness of Ireland, also known as ‘Mary of the Gael’. Her feast day, Saint Brigid’s Day, is the 1st of February, the start of the Spring season. Traditionally Saint Brigid crosses like this one are made from rushes on her feast day and hung in the house for the rest of the year to ward off evil and danger from fire.

Saint Brigid’s Day is believed to have come from the pagan festival ‘Imbolc’ which literally beans ‘in the belly’ and celebrates spring and the arrival of longer days. In pagan mythology, Brigid was the goddess of fertility.

In some parts of Ireland St Brigid’s Day is celebrated with the ‘’Brideog’’, a handmade doll traditionally fashioned out of straw and dressed in white. The Brigeog is taken from house to house and usually at each house the visitors play traditional Irish music and dance.

Saint Brigid is associated with County Kildare and is sometimes referred to as ‘Brigid of Kildare’. According to legend Brigid founded a monastery at Kildare on the site of an older pagan shrine to the Celtic goddess Brigid, served by a group of young women who tended an eternal flame. In the 6th century, a monastery was erected on the same site. The original monastery no longer exists but a new Cathedral was built on the site during the 13th century. This Cathedral still stands and the sisters of St. Brigid (nuns) reside there.

The best way to learn about Ireland is to visit! Contact us today for a quotation  –