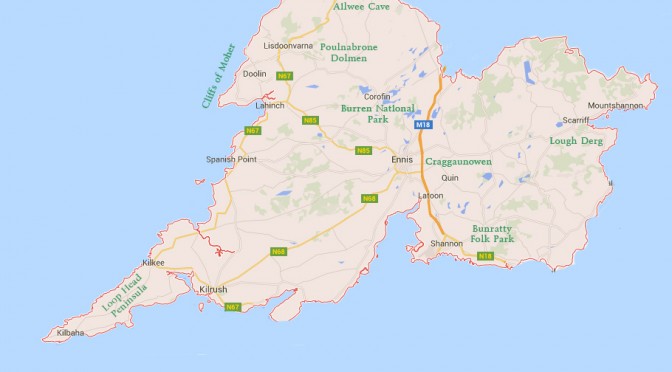 Clare is a county on the heart of the west coast of Ireland located along the  Wild Atlantic Way coastal route. With a varied terrain ranging from rolling countryside to the Atlantic coastline.  County Clare is an excellent place to discover culture in Ireland. The county is blessed with places to visit – from the UNESCO Burren, Cliffs of Moher Geopark, award-winning Loop Head and some historic towns like Bunratty, Killaloe and Ennis.

Read about the 10 Places to Visit in County Clare

The Cliffs of Moher

The Cliffs of Moher is one of Ireland’s most visited attractions and when you will visit you will see why! The cliffs rise to a height of 120 metres above the Atlantic Ocean and even reach 214 metres at the highest point near O Brien’s Tower, an observation tower built by local landlord Cornellius O’ Brien. The views are stunning and on a clear day you can see the Aran Islands, Galway Bay and even as far as Connemara!

On the opposite side of County Clare in the East, you will find Lough Derg. There are two Lough Derg’s in Ireland, the other one is in Donegal.  Lough Derg in Clare is the second-biggest lake in the Republic of Ireland and the third-biggest on the island of Ireland. It shares is shores with northwest Galway and eastern Tipperary. On the Clare side, some nice places to visit along the lakeshore include Killaloe, a picturesque town with nice bars and restaurants and a 13th-century cathedral, Scariff and Mountshannon where you can take a boat trip across to Holy Island in the centre of the lough.

Bunratty Castle is the most complete Castle in Ireland, it is completely furnished on the inside giving the visitor a real sense of what the castle would have looked like for residents in the 15th century. Bunratty Folk Park which surrounds the castle is a reconstructed village where buildings like the rural farmhouse, the village shop and post office and several different types of traditional cottages have been recreated. The folk park gives a fantastic insight into what life was like for different segments of Irish society in the early 19th century. If you are staying in Clare region, think about visiting Bunratty at night to take part in one of their famous medieval banquets. Advance booking is required for this and we can book this for you as part of any tour visiting Clare.

This attraction is especially good if you have children with plenty of parkland to run around in and a collection of unusual animals such as wild boar! On-site the primary feature is a reconstructed Crannog; an artificial island on which people built houses, kept animals, and lived in relative security from rival clans, a ring fort. The attraction also has a souterrain which is an underground tunnel used for storage or to hide from would-be attackers, a fulacht fia which was used for cooking in the Bronze Age and Craggaunowen Castle, a typical example of a fortified tower house built in 1954.

The Burren refers to the regions of Clare and south Galway which share a unique karst landscape known for its rare species of flora and fauna. The main towns in the Burren region are Ballyvaughan, Kinvara, Tubber, Corfin, Kilfenora and Lisdoonvarna. The Burren National park is located in Corofin, here you will find five marked walking trails that take you through many different fascinating and beautiful habitats, such as limestone grasslands, hazel/ash woodlands and limestone pavements. If you plan to visit the national park, a good place to start is the Clare Heritage Centre in Corofin. In the village of Balllyvaughan consider visiting Ailwee Caves, a cave system consisting of over a kilometre of passages leading into the heart of a mountain.

This is perhaps the most photographed attraction in Clare after the Cliffs of Moher. It is situated 8 km south of Ballyvaughan, about 10 km north-west of Kilnaboy. The structure dates from the Neolithic period, and excavations which uncovered the remains of sixteen adults and six children have shed light on burial customs of Clare’s early farming communities

The Loop Head Peninsula at the very tip of southwest Clare is a scenic coastal drive which takes in the coastal villages of Kilrush, Carrigaholt, Kilbaha, Loop Head, Kilkee and Kilrush – the entire journey is a distance of around 81 km.  Top sights to take in include Loop Head’s main town Kilkee which was frequented by the likes of Charlotte Bronte and Alfred Tennyson and Carrigaholt which has outstanding sea views. One of the most beautiful natural features on the peninsula are the Bridges of Ross on the western side of Ross Bay harbour, looking north to the Atlantic Ocean. At the very tip of the peninsula, you will find Loop Head and its famous lighthouse.

Clare is a very popular surfing destination and it is known throughout the world as a surf destination. Fanore, in particular, is famous for surfing and water sports. Fanore is a small little village and it has accommodation options along the beach to stay and enjoy the waves and ocean. It does not matter your surf ability – with surf schools available it caters for everyone and don’t be afraid to try and catch a wave on The Wild Atlantic Way!

County Clare is blessed with its unique landscape in the Burren area and it has some of the most famous caves in the country. Take a tour at the Aillwee Cave and explore the winding passages, chasm, rock formations and waterfalls. Doolin Cave is famous for its Great Stalactite and you will get the chance to go underground by 200 feet and be transported back 350 million years.

Scattery Island can be reached by boat from Kilrush pier during the summer season with guided tours available free of charge. It is a monastic island and named after the mythical monster on the island. It was St Senan who founded the monastic settlement on the island in the 6th century. Over the years the islands have been attacked by the Vikings and others but in spite of this the round tower, cathedral and oratory can still be seen. The last island dwellers left in 1978 for the mainland; who were river pilots and gifted currach handlers. The ruins of the village remain with streets and several churches remaining. On the island also is a Holy Well which has healing properties.

The best way to learn about the 10 places to visit in Clare is to discover by yourself! Contact us today for a quotation including some or all of these locations today –