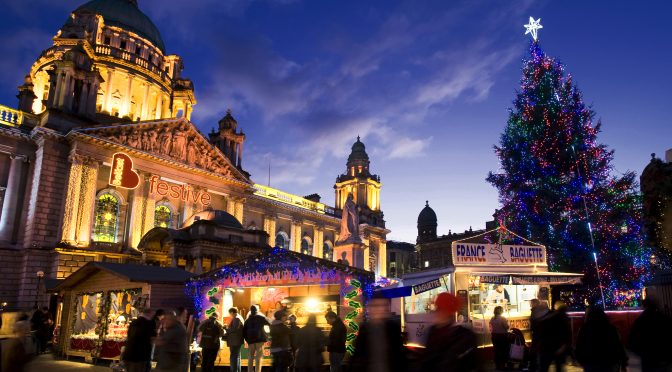 Christmas in Ireland really is a joyous occasion, a time when family members come to celebrate together, a time for tearful airport reunions, boozie parties, festive food, family gatherings and a time for making lasting memories. We’ve put together a selection of our favourite Irish Christmas Traditions purely for your festive enjoyment!

It’s a relatively new tradition but for the past number of years, Ireland has had some great Christmas markets in the lead up to the Christmas period. Galway Continental Christmas Market is probably the longest running market and here you will find more than fifty traders from Ireland and further afield in Europe. The market is outdoors in the centre of Galway City, complete with Christmassy carousels, mulled wine and festive entertainment! It usually runs from the last week of November until the third week of December. In Northern Ireland, the Belfast Continental Christmas Market is also proving to be very popular with numbers and support growing tremendously every year. This market runs from about the 17th  of November until the 22nd of December.

Two of Ireland’s biggest Christmas Festivals are Waterford Winterval & the Dublin Docklands Festival. Popular attractions in Waterford include a festive horse drawn carriage, a vintage Ferris wheel, a Christmas train ride through the city and the Exploration Dome which showcases 360 degree movies on snow creation, astronomy and more! The festival usually runs from the 21st of November to the 23rd of December. With Christmas Choirs, Brass Bands, Christmas Market Stalls and a Family Christmas Treasure hunt, the Dublin Docklands Christmas Festival has been running successfully for a number of years. It runs from December 12th to 23rd and many of its attractions are free.

In coastal towns across the country a freezing cold Atlantic Ocean swim is becoming an annual custom. This is usually done to collect money for local charities or clubs and it is certainly an experience given that the temperature in Ireland around December can drop below freezing point

If there is one thing an Irish mammy knows how to do, it’s  to keep her family well fed at Christmas time! In many households around Ireland Hot Port & Hot Irish Whiskey is the Christmas Drink of choice. Of course, we have the big Turkey dinner on Christmas day and at home in Cork where I hail from we have Spiced Beef on Christmas Eve.

Hunting the Wren (pronounced ‘Ran’ in some places) is one of my personal favourite Irish Christmas Traditions. People have been doing this for hundreds of years in many places throughout Ireland. To hunt the wren, local musicians and dancers dress up and paint their faces, and travel from door to door singing, dancing and playing Irish music. ‘Wren Boys’ go around on Saint Stephen’s Day, the 26th December and money will be collected, usually for local clubs or charities. The original Wren Boys would have hunted and killed a wren in advance to take on parade with them but that’s not done anymore. Local legend tells us that the reason the wren is hunted is because of its involvement in the betrayal of St. Stephen. Another version of this tradition says it’s to celebrate the Wren as the King of all birds. Legend says the Wren is the king because once all the birds in Ireland had a race to see who could fly the highest. The eagle was winning but the clever wren jumped up on his shoulder and flew the final length beating all the other birds, including the eagle!

In an Irish household at Christmas you will find either one or the other of these types of sweets.  A point of constant debate is which one is better. Personally I go for the quality street every time!

Get in Touch-
The best way to learn about Ireland is to visit yourself. Contact us today for a quotation including some or all of these locations today –

One thought on “Irish Christmas Traditions”