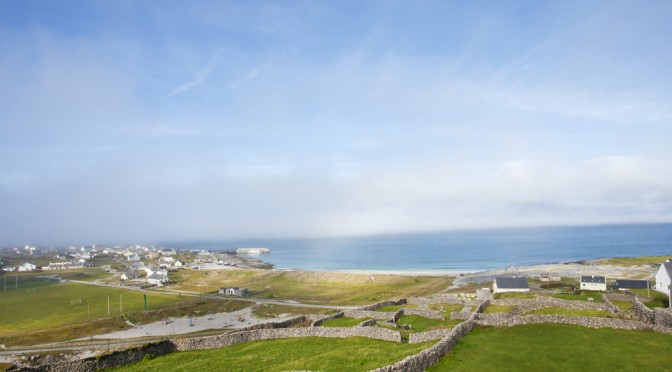 Inisheer (Inis Oírr) is the smallest and most easterly of the famous Aran Islands off the coast of Galway in Ireland. The entire island is about 8km squared and has a population of around 300. Like the other Aran Islands the spoken language is Irish although locals can typically speak both English and Irish.

When you arrive on the island there are usually coaches lined up, waiting to take potential customers on tours around the island which feature the major visitor attractions. There is a small fee for these tours, payable directly to the driver.  You can also usually take a tour of the island by horse and trap which is more expensive than the bus tour. You can also hire a bike to get around on the island if you prefer.

The main village is called Baile an Lurgáin and you can walk to it from the pier.  In the village you will find the local shop, pubs, B&Bs and restaurants.

Some of the main tourist attractions on the island include –

The Wreck of The MV Plassey: The MV Plassey ran into Finnish Rock on Inisheer in 1960 and the entire crew were rescued by a group of local men. The wreck was made famous when it featured in the opening credits of Father Ted.

O’Brien’s Castle: This castle ruin is located on one of the highest points of the island overlooking the beach and pier. This castle is thought to have been built in 14th century.

An Trá Beach: As you approach Inisheer by boat you can’t miss seeing the white sandy beach known simply as ‘An Trá’ which in English means ‘The Beach’! On a fine day, the water is a beautiful shade of blue.

Áras Éanna Arts Centre: Inisheer has a dedicated arts and culture centre which displays traditional Irish and modern arts. The centre has a programme of events and exhibitions from artists resident on the islands which changes frequently.

Want to book a tour that includes Inisheer?

Learn more about Inisheer by spending time there. Contact us today for a quotation including Inisheer today –