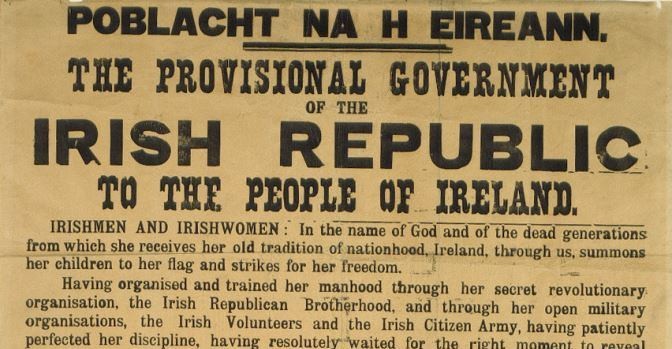 The 1916 Easter Rising was an armed rebellion in Ireland during Easter Week by members of the Irish Volunteers led by Irish activists Padraig Pearse & James Connolly. With far superior soldier numbers and weaponry, the British army quickly defeated the rising, and Pearse agreed to surrender on Saturday 29 April 1916. Many of the leaders were executed following the events and so the rebellion in one sense was a failure. It did however succeed in bringing republicanism back to the forefront of Irish politics and support for an independent Ireland continued to rise which eventually led to Ireland’s freedom after the war of Independence.

This year the people of Ireland are getting ready for the 100 year anniversary of the 1916 Easter Rising.  The Centenary celebrations will include a formal State celebration to remember the events and the people who made it possible. Some of the best places to visit in Dublin to find out more about the Easter Rising 1916 include;

The National Museum of Ireland at Collins Barracks: The National Museum of Ireland is a fantastic museum featuring decorative arts and Irish history.  Given that the museum is placed in a building that was a former Army Barracks, there is an emphasis on Irish Military History. The 1916 Rising is currently covered in the Soldiers and Chiefs Exhibition but in 2016 a brand new exhibition will open called Proclaiming a Republic: The 1916 Rising, this exhibition will mark the 100 year anniversary of the Rising and is due to open around the 3rd of March 2016.

Kilmainham Gaol: Kilmainham Gaol is one of the biggest unoccupied gaols in Europe and played a central part in the events after the 1916 Rebellion. The Gaol had been closed at the time of the rising but was reopened especially to house the hundreds of men and women arrested for their part in the battle. In early May, fourteen of these prisoners including Padraig Pearse were executed in the stone breakers yard section of the grounds.  Nowadays, attractions at the museum include a major presentation detailing the political and penal history of the prison and its restoration. The museum have not yet released any information on their 1916 Centenary celebration events but it is expected that there will be events to commemorate the rising over the Easter period in 2016 and beyond.

The General Post Office (GPO):  The General Post Office (GPO) in the centre of Dublin’s O’Connell Street is now the headquarters of the Irish Postal Service, An Post. During the Easter Rising, the building was headquarters of the men and women that took part in the battle. At the moment there is a small virtual exhibition in the GPO about the rising but in March 2016 a new visitor centre dedicated to the 1916 Rising is due to be opened called GPO Witness History. The museum will feature special effects, soundscapes and stories of real Irish people.

The Royal College of Surgeons, Stephen’s Green & the Shelbourne Hotel: During the Easter Rising, Michael Malin and Countess Markievicz were assigned to Stephen’s Green, a 22 acre public park in the centre of the city. It turned out that St. Stephen’s Green was a vulnerable position as it was overlooked by the Shelbourne Hotel which was occupied by British forces. Seeing this, the Green was abandoned and the volunteers fled to the Royal College of Surgeons. St. Stephen’s Green is still open to the public, there are 3.5km of pathways to walk through and you will find a bust of Countess Markievicz to the South of the central garden.

The Four Courts: The Four Courts is Ireland’s main court of Justice and houses the Supreme Court, the High Court and the Dublin Circuit Court; it is located on Inns Quay in the city centre.  The first battalion of the Dublin Brigade, led by Edward Daly, occupied this building and the surrounding streets during the rebellion.  The building survived the Rising, but was subsequently destroyed during the Civil War in 1922. It was rebuilt and reopened in 1932.

Glasnevin Cemetery: Many of the people that died in the 1916 rebellion and subsequent battles for freedom were interred at Glasnevin Cemetery. The Glasnevin Trust operates tours of the graveyard daily and in 2016 there is a yearlong program of events planned to commemorate the 1916 Rising including re-enactments and special tours.

Dublin Castle & City Hall: The uprising began at Dublin Castle which was the centre of British Rule in Ireland. The rebellions failed to capture City Hall however they succeeded in occupying City Hall which is situated beside Dublin Castle.

City Hall is open to the public all year round and there is a permanent multi-media exhibition which traces the history of Dublin from 1170 to the present. There is also a new exhibition which tells the story of Dublin’s firefighters during the 1916 Rising.  In addition the original copy of the 1916 Proclamation which has been recently preserved will be on display at City Hall from Easter 2016.

The grounds of Dublin Castle are free to explore, as are the Chester Beatty Library and the Revenue Museum which are located within the grounds. Access to the State Apartments and the Chapel Royal are by guided tour only and tickets can be purchased on site.

Would you like to explore the locations associated with the 1916 uprising yourself? Then get in touch with us today and we can handle all the arrangements!